While tracking down a killer, clues lead homicide detective, VIVIANE TAYLOR to suspect, JULIAN DeMATTEO. From the get-go, DeMatteo unsettles and irritates her. He is a force she has never encountered, someone who excites her even though he is forbidden. Her instincts warn that he’s hiding something and she is determined to uncover those secrets. 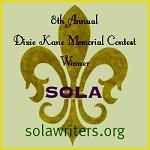 His body was a machine—arms pumping in sync with legs that devoured the damp concrete in long strides. He’d raced through the city for hours, running for his life. Yet his lungs did not heave for air, sweat did not cover his brow, and his heart did not hammer in his chest. His heart did not beat.

Swift and silent, he stuck to the shadows. Except for a few people who glimpsed a blur in their peripheral vision as he zipped past, he sped through the crowded streets unnoticed. He turned left down a side street, fleeing the flickering lamps that spilled dull yellow patches of light on the cracked pavement and the remaining humans who were oblivious to his plight—and what chased him. Another quick left placed him in an alley. He splashed through puddles, the splatter of displaced water the only indication of his presence. The alley dead-ended at a thirty foot block wall.

He slid to a stop and inhaled the damp air. His heightened senses registered their silent approach. They surrounded him, covering the rooftops and blocking his retreat. Their red eyes glowed in the darkness like vultures watching their soon-to-be meal. The hair on his neck rose and he turned to confront his enemy. Their sharp, white teeth glistened in the moonlight.

He glanced at the full moon and exhaled out of habit. Two fatal mistakes marked his two hundred and fifty-five years of life—turning left down this blind alley and falling in love with a mortal woman.

Shadowy figures jumped from the rooftops, their bodies blotting out the sky as they sliced through the air. The cold moon that lit his way in rebirth and remained his constant companion would now witness his final death. A fitting end to a life filled with anguish for not being able to touch her, hold her—to claim her.

Fingers tore into his chest, splintering his ribs in search of his heart. A clawed hand closed around the non-beating muscle and squeezed. He clamped his teeth to prevent the scream from slipping past his lips. Instead, he smiled and watched confusion flash across his tormenter’s face. For an organ that no longer functioned, it produced such an agonizing ache he wished it vanquished from his body.

He spread his arms wide, welcoming the end. A life without her was not worth living. The ancients would have called him foolish. They would have told him his heart contained his emotions, his dreams and desires, and housed the last vestiges of his humanity. But he knew the truth.

“Thank you,” Victor whispered as his enemy yanked the once indispensable thing from his chest. With a suck and pop his fading vision spied the bloodied hand holding the dead remnant of his past. Such a sentimental organ never belonged in the chest of the monster he’d become.

“Author TJ Shaw begins this novel with a bang and the action never slows nor lags. From the first pages, I realized I was in for a great vampire love story and would be up late reading. This is an intriguing, emotion filled story of two people who are private, lonely, closed off, and needy, yet to all appearances they have it all.” VERA’S BOOK REVIEWS and STUFF

“There are three things that tell me if the book in front of me is going to be a keeper.  World building.  Secondary characters. And the believably of the main couple.  For me personally, if those three magical elements do not come together – then it was simply a decent story, and I’ll easily move on to the next one. Yes, I’ve just described Divergent Bloodline.” MARSHA at KEEPER BOOKSHELF

“This was a very refreshing paranormal romance.  The characters are entertaining, enthralling and contain more layers as you get further into the novel.  The world that T.J Shaw has built is one that will keep you turning the pages until you have read every secret about Viviane and Julian.” The BOOK MAVEN